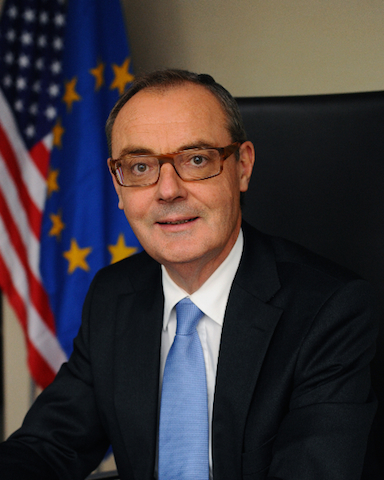 “Transatlantic Relations & Global Challenges: What’s on the Agenda for 2016?”

David O’Sullivan took up his post as European Union Ambassador to the United States in November 2014. A long-time EU official, he has previously served as Chief Operating Officer of the newly-created European External Action Service now led by EU High Representative Federica Mogherini, as EU Commission Director General for Trade (2005-2010), Secretary General (2000-2005), and Director General for Education and Training.  He began his diplomatic career in the Irish Foreign Ministry and spent four years in the EU Commission’s Delegation to Japan.   He is a graduate of Trinity College, Dublin and the College of Europe (Bruges) and holds Honorary Doctorates from the Dublin Institute of Technology and Trinity College Dublin.  He was awarded the EU Transatlantic Business Award by the American Chamber of Commerce in 2014.

Sponsored by The Center for European Studies; World Affairs Council of Austin; Center for Russian, East European and Eurasian Studies; Center for International Business Education and Research; LBJ School of Public Affairs; The Institute for Historical Studies in the Department of History; and the Consulate General of Ireland, Austin.

The talk will take place in Room 203 on the conference side (west side) of the AT&T Executive Eucation and Conference Center (1900 University Avenue, Austin, 78712).

Parking
Parking is available in the AT&T Parking Garage (entrance on the south side of the building) for a fee. There are also Pay-to-Park spaces along University Avenue. Unfortunately, we will not be able to validate parking.

There is no other cost for this event, but RSVPs are required.  RSVP via the link below.