Now that the feds have left the table, can Battlestar Galatica save us?

We kicked off our new “World Spins” series Dr. Josh Busby pointing out that not only is the weather crazy but we currently have no policy in place to manage its unpredictable impacts.  This was the first in a two-part deep-dive into our fractured climate policy.  The second part, on April 12, will focus on the impact of dramatic and unpredictable weather swings on national security.  Read Josh’s report for the Council on Foreign Relations here and his analysis “Climate change brought down another prime minister in Australia.  Here’s what happened.”

With former Ambassador and Fox news analyst John Bolton replacing H.R. McMaster as President’s Trump’s national security advisor, the Battlestar Galatica label, coined from the 2015 is starting to make more sense. I’m hoping you can make it to the second part which will examine the impact changing climate conditions have on national security. 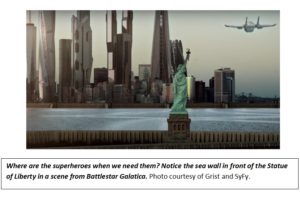 Here are some points from the Jan. session on Climate Change and the Paris Accord:

The Paris Accord:  A global agreement based on voluntary commitments

The Federal Government may have left the table at the Paris Climate Agreement, but Busby reminded a group gathered at the inaugural session of the World Affairs of Austin’s “World Spins” series, but “We’re still in.”  The basis of the Paris Climate Agreement is voluntary pledges to reduce greenhouse gases, the major contributor to climate change. No surprise that the major contributors are the world’s largest economies, all of whom pledged to support the agreement – until last December when President Trump announced the United States’ intent to withdraw its support.

The leadership void left by the administration as it backs off of enforcement and funding leaves the task to  – who?   In the two months since the President’s statement, that has become the million-dollar question.  Speaking of Battlestar Galatica, which references the 2015 climate change-themed sci fi movie of the same name, eyes are on France’s Emanuel Macron who, blessed by his country’s strong nuclear program, leads a country with high marks on managing its emissions. The 2018 U.N. climate conference will be held in the heart of Poland’s coal mining district.

Here, Former New York City Mayor Michael Bloomberg and California’s indefatigable Governor Jerry Brown  have committed to their time and resources to supporting the U.S. commitment to the Paris Agreement absent the Feds.  Brown recently formed partnerships with China’s  President Xi Jinping and Germany to reduce carbon emissions under the Under2 Coalition, referring to a commitment to limiting global warming to 2 degrees Celsuis, a benchmark established by the Intergovermental Panel on Climate Change to avoid harmful consequences. Bloomberg, backed his pledge with $15 million.

Attacking a big problem by breaking it into smaller parts

Busby has published some practical options for actions, including:

Speaking of pledges, Dr. Busby has promised to return later this year to talk more about the policy, challenges and politics around climate change.

Busby is an associate profession at the University of Texas’ LBJ School of Public Affairs. He has been in the thick of climate policy since 2008, one of the lead researchers on a five-year, $7.6 million project funded by the Department of Defense called “Climate Change and African Political Stability” and a principal investigator of another DOD-funded project, “Complex Emergencies and Political Stability in Asia”, a three-year, $1.9 million grant. He is a negotiator, was at the Paris Climate Accords and will attend the follow-on meeting in Poland later this year.