Despite a climate of political uncertainty, el Fiesta de El Grito brought a lively crowd, captivating performances and themes of belonging to mark 207 years since Mexico gained independence from Spain.  As hundreds of celebrators gathered at the South Entrance of the Texas Capitol, they listened to various music acts, voiced their love for Mexico and enjoyed a festive evening. 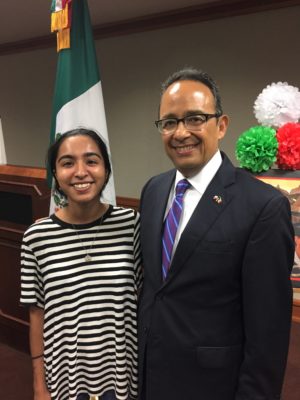 With mariachis, food stands and different activities, the event began earlier in the evening around 5 p.m. and increased in size until the big moment, the traditional “grito” at 9 p.m. led by Austin’s Consul General of Mexico Carlos González Gutiérrez. Rooted in the Mexican War of Independence, the grito called for independence and is followed by three shouts of “Viva Mexico!”

Throughout the event, not only were families and friends enjoying one another’s company, but the wider Austin community also reaffirmed their shared heritage, mutual support and diverse identities in the United States. One of the musical acts dedicated a song to those affected by Hurricane Harvey while others gave shout-outs to states in Mexico and several countries in Latin America that are also celebrating their own independence days throughout the weekend.

This year’s Fiesta del Grito served as a reminder of the multicultural fabric of our city, our state and our country. From Austin to across the United States, Mexican American heritage remains part and parcel of the past, present and future. This celebration of independence also promoted an overall celebration of diversity and an unwillingness to back down during times of uncertainty.