In collaboration with the Kozmetsky Center at St. Edward’s University, we will offer a lecture by Dr. Fran Pilch, Professor Emeritus of the United States Air Force Academy.  Dr. Pilch’s lecture will incorporate insights from the course she developed for the Air Force Academy entitled “War Crimes, Genocide, and Human Rights,” and extensive research included in her book released on this topic in 2017.

Dr. Pilch’s lecture will concentrate on the actual accounts of survivors of Pol Pot’s genocide which claimed the lives of an estimated two million people—more than one-fourth of the total Cambodian population.

Dr. Pilch served as a Fulbright-Hays Scholar in South Africa and a Fulbright Scholar in Mongolia, where she taught International Law at the School of Diplomacy, National University of Mongolia, in Ulaanbaatar.  In 2011-12, she was named the Case Carnegie Colorado Professor of the Year.  She was awarded her B.A. from the University of Connecticut and her M.A. and Ph.D. in International Relations from Yale University. 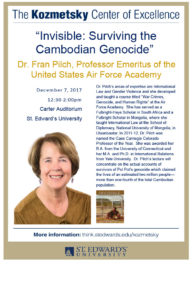