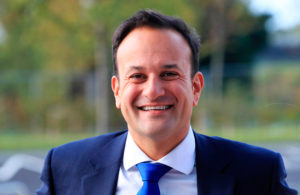 SXSW, the Consulate General of Ireland in Austin and the World Affairs Council of Austin are pleased to announce a conversation featuring Taoiseach Leo Varadkar, with Evan Smith of the Texas Tribune.  During the event attendees will learn how tech made Ireland become one of the most open and globalized economies in the world. Mr. Varadkar will also discuss Irish innovation at this year’s SXSW and how the Irish tech sector is increasingly impacting the US economy.

Leo Varadkar was elected in June 2017 as Ireland’s youngest ever Taoiseach (Prime Minister). Born in 1979, the son of an Indian father and Irish mother, Mr. Varadkar personifies the dynamic, youthful and diverse Ireland of today. He is one of the few LGBT Heads of Government in the world. Having studied medicine at Trinity College Dublin, Mr. Varadkar qualified as a medical doctor but soon ventured into the world of politics, in which he has risen rapidly to the leadership position he holds today. He heads a Government that is shaping the Ireland of the 21st Century, a country at the heart of the European Union, and an island at the center of the world. Mr. Varadkar is visiting the United States to further deepen and advance the bilateral relationship between the two countries; he will attend SXSW before meeting with President Donald Trump in Washington DC later in the week.

Mr. Varadkar is the only Head of Government speaking at SXSW in 2018. Ireland is one of the oldest international participants at SXSW.   Event is available to all SXSW badge holders.  www.sxsw.com