Events Ukraine between the EU, US and Russia: The Quest for Security and Development 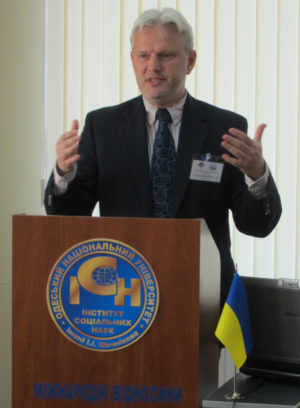 Ukraine between the EU, US and Russia: The Quest for Security and Development

Since the beginning of Euromaidan Ukraine finds itself entangled in a deep crisis that dramatically alters the situation in the country, its internal (socio-economic, regional) dynamics and international positioning vis-à-vis its neighbors and also other significant regional and global players. The depth of the crisis was evident since its start on November 30th, 2013 but the scale of the crisis has markedly grown since Russian federation has carried out the annexation of Crimea in March 2014 and has begun its intervention in Donbas shortly afterwards. The crisis, which originally mostly had features of an internal one, has quickly internationalized, becoming a conflict, indeed, with varying levels of intensity and at some points resembling an actual war. Throughout this period of time Ukraine has been faced with a number of urgent and critical challenges. It had to: engage in a military conflict with Russian troops and their proxies in Eastern Ukraine; cleanse the political system and introduce real, meaningful reforms; reinvigorate its fledgling (and scarred by war) economy. In living up to dealing with all these tasks Ukraine must find a right format of dealing with some of the international players, the most significant among them being Russian Federation, the European Union and the United States of America.  RSVP HERE.

Volodymyr Dubovyk is an Associate Professor at the Department of International Relations and a Director of the Center for International Studies at the Odesa I. Mechnikov National University. Among his teaching and research interests are U.S. foreign policy, U.S. – Ukraine relations, Black Sea regional security, foreign policy of Ukraine. He has had his fellowships at the Kennan Institute, W. Wilson International Center for Scholars in 1997 and 2006-07 (Fulbright), at the Center for International and Security Studies at Maryland (CISSM), University of Maryland in 2002, has been a visiting faculty at the University of Washington (Seattle) in 2013 and is a Fulbright Visiting Scholar at St. Edwards university/University of Texas, Austin in 2016-2017 study year. Volodymyr was a member of various professional associations over the years, he participates in PONARS Eurasia (New Approaches to Research and Security in Eurasia), project based in George Washington University.