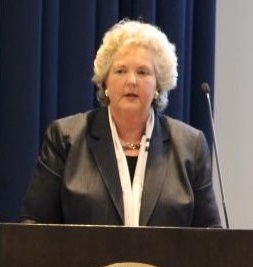 The World Affairs Council of Austin is pleased to host Sharyl Cross, PhD, Director of the Kozmetsky Center at St. Edward’s University and Global Policy Scholar at the Kennan Institute, Woodrow Wilson International Center for Scholars in Washington, D.C.  Dr. Cross will provide an overview of US-Russia relations and the impact on geopolitics.

Sharyl N. Cross, PhD, was appointed director of the Kozmetsky Center at St. Edward’s University and Global Policy Scholar at the Kennan Institute, Woodrow Wilson International Center for Scholars in Washington, D.C., in 2013.  Dr. Cross was Professor at the George C. Marshall European Center for Security Studies in Garmisch-Partenkirchen Germany from 2005-2013 where she was Director of Academics for both the Program in Advanced Security Studies and Senior Executive Seminar, and previously had been appointed Distinguished Professor of Political Science at the United States Air Force Academy in Colorado Springs.

She earned a Ph.D. in Political Science from the University of California, Los Angeles, and was a resident fellowship scholar and consultant at the RAND Corporation completing programs in Russian area and policy studies. Dr. Cross was a Senior Fulbright Scholar and Professor in Moscow serving on the faculty of the Moscow State Institute of International Relations of the Ministry of Foreign Affairs (MGIMO) and the Institute of USA and Canada Studies, Russian Academy of Sciences. She has published widely in leading academic and policy sources on US/NATO-Russia security Issues, Russian foreign policy, Sino-Russian relations, religious dimensions of security, and sources of violent extremism and terrorism.  Dr. Cross has briefed/consulted for the U.S. State Department, U.S. Congress, Office of the Secretary of Defense, and among senior policy and defense institutions throughout Europe and Eurasia.

She is currently co-directing a project on Religion and International Security together with faculty of The Fletcher School of Law and Diplomacy at Tufts University and with support of the Public Diplomacy Engagement section of NATO.  Her most recent book is China, Russia, and Twenty First Century Global Geopolitics, co-authored with Dr. Paul Bolt, Oxford University Press, 2018.   Full bio here. 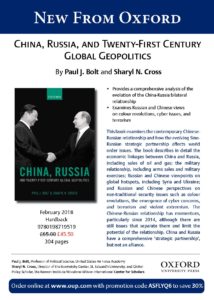