This is a guest post by Ambassador Carlos González Gutiérrez, Consul General of Mexico in Austin.

Mexico and Texas are old friends and partners. We are neighbors that share a 1,254 miles border full of history, economic opportunities, common traditions, and even challenges ahead. Not only is a third of Texas’s population of Mexican origin, our prosperity is closely interconnected and it is in our best interest to reach our full potential as partners and neighbors. 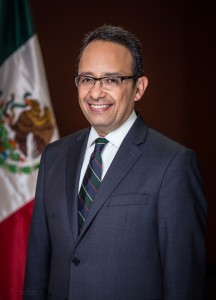 Nowadays we have a successful relationship. The Government of Mexico works extensively with the Government of Texas at the local and state level in a wide variety of subjects. We are remarkable trade partners and we collaborate, sometime dissenting, in security, immigration, environmental protection, among other important issues. Mexico has the largest diplomatic mission in Texas with 11 consulates that not only provide consular and protection services to Mexican nationals, but create networks to strengthen local-level integration between Mexico and Texas.

Furthermore, Mexican entrepreneurs are successfully increasing Mexico’s presence in Texas. Austin, for example, has attracted a significant number of Mexican businesses in the technology industry. The opportunities are outstanding, bearing in mind the potential that our trade partnership has shown. Mexico is Texas’s largest market: In 2014 Texas posted merchandise exports of over 100 billion dollars to Mexico. Almost 50 percent of Dallas-Fort Worth Airport’s international traffic goes to Mexico, with 57 daily flights to 15 cities. In 2014, 1.9 million trucks crossed from Mexico to Laredo carrying goods, some of them as far as Canada.

There are plenty of opportunities to build upon our existing partnerships, and to achieve our shared goals of prosperity, security and a better quality of life. The key is to keep a forthright dialogue and re-launch bilateral forums to discuss common opportunities and challenges. Bearing in mind that the Secretary of Foreign Affairs of Mexico visited Texas and that Governor Abbot will visit Mexico in the following months, it seems like we are going in the right direction.

About the author Carlos González Gutiérrez Ambassador Carlos González Gutierrez is the Consul General of Mexico in Austin since May 1st. As a member of the Mexican Foreign Service since 1987, some of his previous assignments have been: Consul for Community Affairs at the Mexican Consulate in Los Angeles (1989-1995). Director for Community Affairs at the Program for Mexican Communities Abroad (1995-1999). Counselor for Latino Affairs at the Mexican Embassy in Washington D.C. (1999-2003). Executive Director of the Institute for Mexicans Abroad at Mexico’s Ministry of Foreign Affairs. Consul General of Mexico in Sacramento. In September 2011, he was promoted by the President of Mexico to the rank of Ambassador. He has a B.A.in International Relations from El Colegio de México, and a Masters Degree also in International Relations from the School of International Relations at the University of Southern California. He is author of several publications about the Mexican population in the United States. Ambassador González Gutiérrez is married to Alina. They have two daughters, Marina and Camila.