Events Ireland in Austin, Ireland in the World: A Discussion with Adrian Farrell, Consul General of Ireland 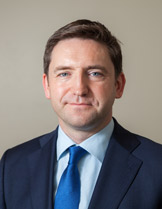 Ireland in Austin, Ireland in the World: A Discussion with Adrian Farrell, Consul General of Ireland

Adrian Farrell was appointed as Ireland’s first Consul General in Texas in September 2014. Ireland’s new Consulate is only the second foreign diplomatic representation in Austin.

In his remarks Farrell will discuss Ireland’s strong historic ties with the United States, and how the establishment of the new Irish Consulate in Austin will further strengthen Ireland’s future relations with Texas. As Ireland celebrates the 60th anniversary of its membership of the United Nations, Farrell will also highlight Ireland’s key foreign policy priorities and its global diaspora.

Event attendees will also hear about Ireland’s EU membership, current social and political developments in Ireland and why the Irish economy continues to grow at a faster rate than in any other EU state.

The event will take place at the new Ireland House Austin which was opened by Ireland’s Prime Minister Enda Kenny last March.

Parking available in the Bank of America garage and at street meters. Regretfully, there are no free parking options.

Please register for this event at http://irelandaustin.eventbrite.com